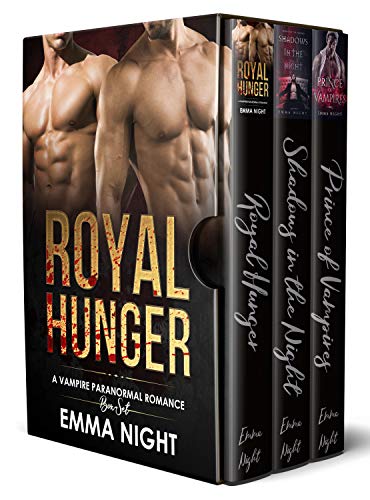 This is a 3 book box set

Royal Hunger: Dawn knew that her unusual uncle would soon return from Europe.  When he returns, he is not alone.  He has brought home a man that almost instantly brings Dawn to her knees.

As Danger approaches, Will Dawn and Asher make it though alive or are they doomed from the start?

Shadows in the night: Cora considers herself to be an average girl who may have a bad habit of dating multiple guys at once.

When she finds herself taken and thrown into a world of dangerous betrayal and sizzling passion, she finds that her very existence is in danger.  Just when the end is near, she is rescued by two brothers who are from the same dark world of vampires.  A choice must be made. Can she choose between the brothers or will it be too late?

Prince of Vampires: Amee takes a dangerous wrong turn when she decides to go out for a night on the town.

Can Ross save Amee from her deadly demise, or will he watch her simply disappear forever?